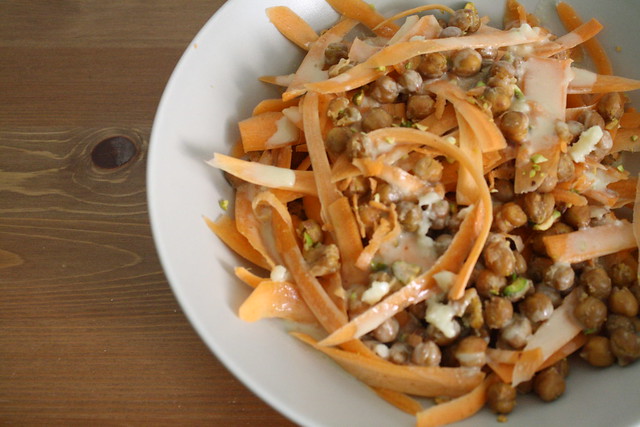 Carrot Salad with Tahini and Crisped Chickpeas from Smitten Kitchen
This turned out to be, surprisingly, one of my new favorite recipes. It’s easy to make, it’s light and tasty, and it’s cold–perfect for last weekend when we had a terrible heatwave that made me lose the will to do much of anything. We followed this recipe to a tee, except for the parsley. I even thought “man, that dressing is so tart!” but then I saw the note saying that it’s supposed to be. And you know what? It tasted amazing on the carrots, chickpeas, and pistachios. Yum! This will definitely become a lunchtime staple for me. 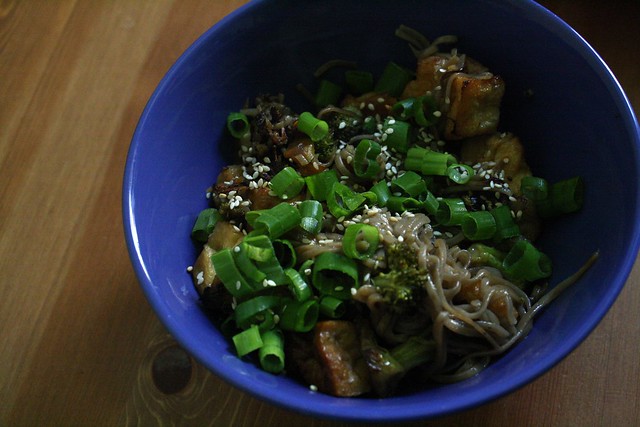 Speedy Veggie ‘n Brown Rice Noodle Bowl with Homemade Teriyaki Sauce from Oh She Glows
I made this meal because I thought I had edamame in the freezer (I didn’t). But it turns out I did have some awesome tofu, so I used that instead. Of course there was no celery, because we don’t care too much for that veggie in this home, so I just went heavy on the others (broccoli especially). Both M. and I liked this (his favorite part was the carrot “noodles”), but in the future it could definitely include more soba noodles, as we only had one bunch left and I was too lazy to make a run to the Asia shop for more. As for the teriyaki sauce, I ended up not liking it a ton, so I used a pre-made one (which probably has lots more sugar and salt, I know). Overall, I think this is a great recipe that can use a lot of substitutions based on what’s in the house or what you like.