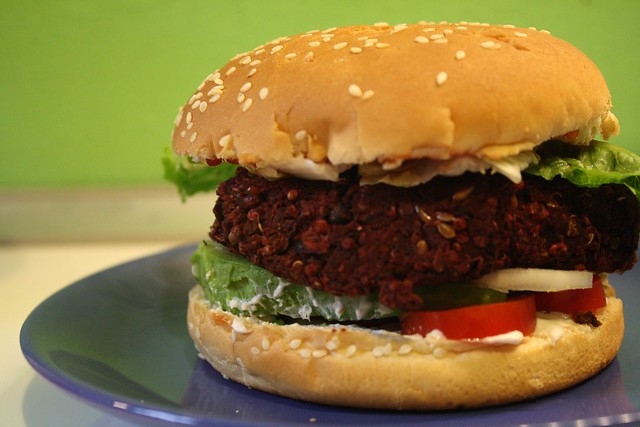 Smoky Beet Burgers from Clean Wellness
M. does not like beets and just cannot be convinced otherwise. In fact, the only time he has eaten them and liked them was at Cookies Cream (maybe when you’re paying €50 a person for dinner, it all just tastes better), but the rest of the time he usually just makes a face and refuses when I suggest he try them. I, on the other hand, love them, and so when I make them, it’s not often but usually for things for myself, like in my smoothies or hummus. This time around, I thought maybe he would like these burgers, since, well, burgers. Yet although he didn’t refuse, his small bite provoked a reaction of that face he makes where beets are concerned. “Too beet-y,” he said. Luckily I had a back-up plan for his burger patty, and I got to have these all to myself. The taste was great but they fell apart, so I used the leftovers paired with hummus and veggies and they were just as good. 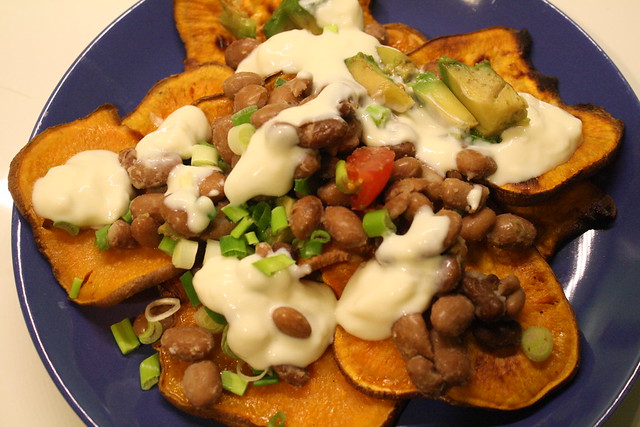 Loaded Sweet Potato Nachos from Two Peas & Their Pod
Ask M. what he wants for dinner and at least 28% of the time it’s burritos. So on an evening when there wasn’t much time to prepare or eat the food, I decided to take inspiration from this and make a burrito-like dinner. But sweet potatoes are more delicious and healthier than chips, and they’re easier and less messy than homemade tortillas, so this recipe was a no-brainer. It was veganized, which means we didn’t use any cheese, and we had plain soy yogurt for the sour cream. We also added salsa verde and jalapeños to the mix; one thing that’s so great with this recipe it that it’s so easily customizable to your own preferences. Definitely a great standby for easy dinners or days when you just want to snack a bit. 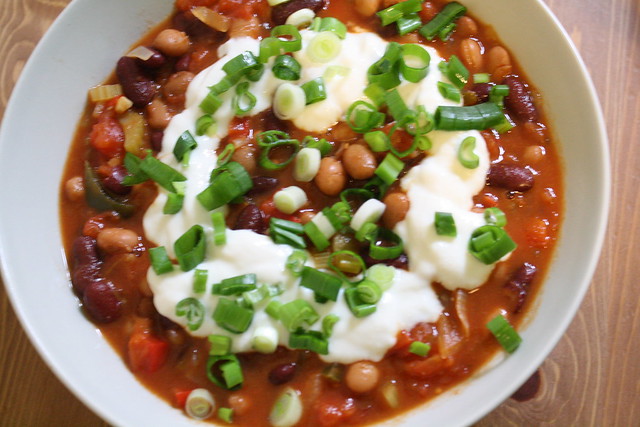 Vegan Chili from Oh She Glows
This recipe came attached with a claim that it’s the best vegan chili the author has had. That’s definitely something to live up to, but considering that all her other recipe are amazing, I wasn’t too worried. And guess what? It is pretty freaking great. I have actually never made vegan chili before, but I don’t think I’ll need to look further for a recipe. This one was loaded with veggies and beans and full of flavor! We didn’t make the sour cream, but instead used plain soy yogurt, which was fine for us. The only thing we would do differently is use a different chili powder (the one we have on hand is super spicy, and I used only 1 teaspoon and it was a bit much, even for me) and leave out the celery (neither of us like it that much, and it didn’t really “add” anything to the chili). But if you’re looking for an easy and delicious vegan chili, this just might be “the one.”