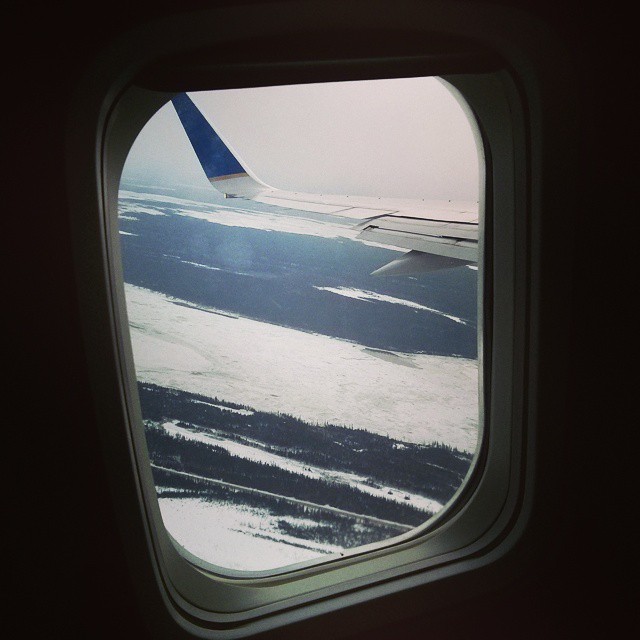 So, we’re finally in Tennessee. As seems to be the tradition, just about everything had to go wrong, which mean we ended up arriving a day after scheduled… but at least Thanksgiving wasn’t ruined.

Our trip started off on Wednesday morning at 6:30 am in Berlin. We woke up and got our stuff together, and M.’s mother drove us to the airport. That’s when we hit obstacle #1, during check-in. Apparently the headwinds were so bad that a fuel stop was required, in Goose Bay, Canada (i.e. the middle of nowhere, and also a place with a half-hour time zone), which would make us miss our connecting flight to Chicago. But the person working the counter immediately rebooked us for a flight later in the day directly to Tennessee, which we decided was much better anyway, in spite of a three-hour layover.

Then, obstacle #2: M. was completely searched and had all of his belongings scanned for residue. It was a random search, but kind of silly. Luckily we were not in a big hurry for our flight, and it wasn’t that much of a minor inconvenience, but it set the tone for the ridiculousness that was to come.

The flight was fine, and the service was great, though we were both antsy toward the end, which tends to happen after hour 6 or 7. Because of the fuel stop and the weather, we lost our slot in line and had to circle for a good 30+ minutes. Finally, we landed, and then went through customs, which was relatively quick for me, but lasted much longer for M.

Then, obstacle #3. As we went to re-check our bags, we were told our flight was canceled due to weather, and were automatically rebooked for the next direct flight, the following evening (Thanksgiving Day), which would put us there at 9 pm The lady at the counter did some searching and was eventually able to get us a different flight, but it meant flying first to Houston on the next plane out, then spending the night there, and taking a morning flight to Tennessee. It was really our only option, so we went with it, knowing it would get us out of the area hit by the snowstorm (Cato), thus decreasing our chances of having bad weather cancel another flight.

So we went through security and hurried to our gate, which happened to be in the boarding process. We were cozy and settled in our seats when the announcement (obstacle #4) came: our pilot was still in Boston, so we all had to de-board the plane and wait. Which we did. We took that time to go get some food, since we hadn’t had a “real” meal since our on-board one hours before. Then we boarded the plane about an hour later and got comfortable again. And waited and waited and waited.

Two hours later, after extra baggage was loaded and the plane had to be refueled again, we finally took off, landing in Houston around 10:30 pm. At this point, we’d been awake been awake almost 24 hours. Once we got off the plane, we were given vouchers for food and a hotel room, and told to use the courtesy phones downstairs to call our shuttle.

Obstacle #5: the food court we were directed to had just closed, which meant we had to go hungry for the time being. So we just got our baggage and went to the courtesy phone, where we encountered obstacle #5, which was that our hotel wasn’t listed on the phone. And it’s not like we could just call them, because we didn’t have cell service on our phones. So we waited, and waited, and waited.

About 70 minutes later, our shuttle arrived, and all of us tired folk wordlessly got on, followed by the rudest man ever, who was probably waiting 10 minutes maximum, but felt entitled enough to yell at the driver and just raise a total fuss. It only got worse when we headed off to the next terminal and got stuck in dead-stop traffic. At an airport. At 12:15 am. It was unheard of, but what could we do? Well, super jerk dude decided to get hostile and confrontational with our shuttle driver, which resulted in the driver leaving behind the person waiting at the terminal and taking us back to the hotel. If it were me, I would have kicked him off and told him to find his own way, but I guess the good that came out of it is that we arrived at our hotel at 12:30 instead of an hour later.

United put us up at the Hyatt, at a really fancy schmancy hotel, which would have been a bit more awesome if we could stay for more than five hours. Luckily our room was all ready to go, and we quickly exchanged our voucher for a key card before heading upstairs and to bed.

Some 4.5 hours later, we were back up and on the shuttle back to the airport. This is where is switched from stressful to easy-going. We checked in easily, got through security quickly, spent $28 of vouchers on food (since we were starving after not having had a proper dinner the night before), and boarded our plane (a tiny little Embraer). M. listened to podcasts and played phone games and I managed to power nap and before we knew it, we were landing in Knoxville at 11 a.m.

The nice thing about the Knoxville airport is how small it is, which meant that within a couple minutes of getting off the plane, we were past security. We went down to the escalators where baggage claim is, and a moment later, saw my parents coming up. So we all went and hugged, then headed to get our suitcases.

And as we were getting those, who should walk up but my best friend E., who had surprised us by flying in from California to spend Thanksgiving with us?! Talk about an awesome surprise.

The rest of the day was full; we went home and I saw my brother, I got to snuggle all of my parents’ cats, some co-workers of my dad and brother came over, and we ate and drank and had a good time… well, as good a time as we could, given our state. Which means that when 7 p.m. rolled around, into bed we went, at which point we slept for 11 hours.

Now it’s Saturday, and we are feeling pretty normal, and headed to North Carolina today. Looking forward to the next week here with family.