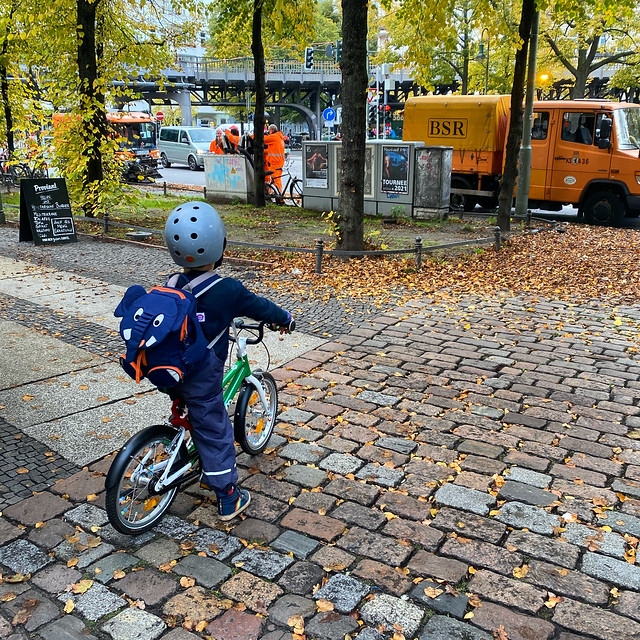 If there’s anything the first lockdown (March–June) taught me, it’s that I need to have a plan. To be fair, it’s not like there was much advance notice or a ton of time to plan things when Corona first showed up, so of course we (meaning those of us who aren’t super organized homeschool-type parents) just faked our way through it all. But ever since summer hit and things began to reopen, there was this very real (and now proven to be very valid) feeling that we’d find ourselves back in another lockdown. So I began to come up with a better idea of how we’d make it work. 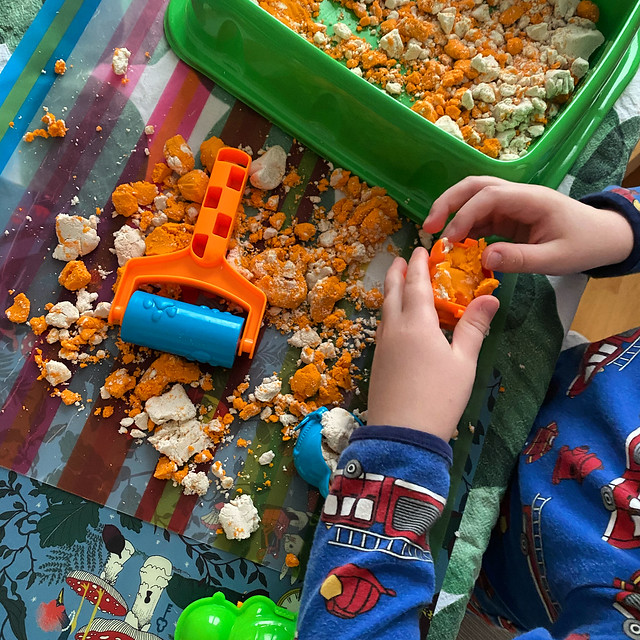 The first time around, evenings usually consisted of sitting down to the table with M. after our son had fallen asleep and going over our schedules for the following day. I’m freelance, which means I have a bit more flexibility in my schedule, so a lot of it was working around the mandatory meetings M. had to be in. (And there were a lot of them!) He blocked off times that weren’t yet spoken for, he moved things around, he asked his teammate to cover things for him. And then during the day, it was a non-stop game of musical chairs, only there were two chairs: one in my office, and one in the rest of our home with our child, and whoever wasn’t working was parenting and vice versa, and it was context switching and chaos. No two days were the same, so neither of us had consistent schedules, and our kid didn’t even know what to expect with parenting. The thought of having some kind of schedule (these color-coded organized things I saw other parents posting) was more than I could deal with. In fact, the furthest along we got was writing a list of different things we wanted to do and referring to it when trying to figure out how to pass the time. 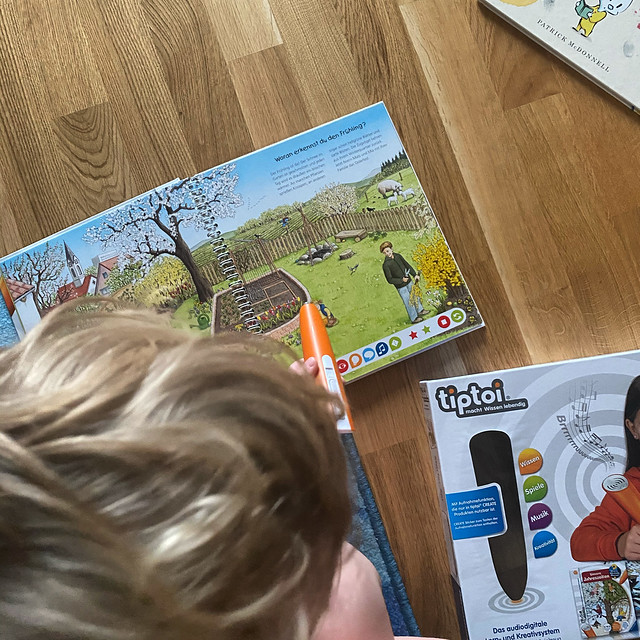 So in December, as an extended lockdown began looking more and more likely, we started talking and planning what January would look like. M. began by extending his vacation an extra week. Meanwhile, I set the expectation that I’d be working a large part of the holiday break. So while he was off December 17–January 10, I was off for most of the days between Christmas and the new year but otherwise working. My theory was that I’d be able to get a lot of work done and be a bit ahead of the game, and I was right. I caught up on a backlog of work for multiple clients, and I even wrapped up a project that I’d been working on for three years. It felt good to cross things off my list and to start off 2021 with a mostly clean slate. 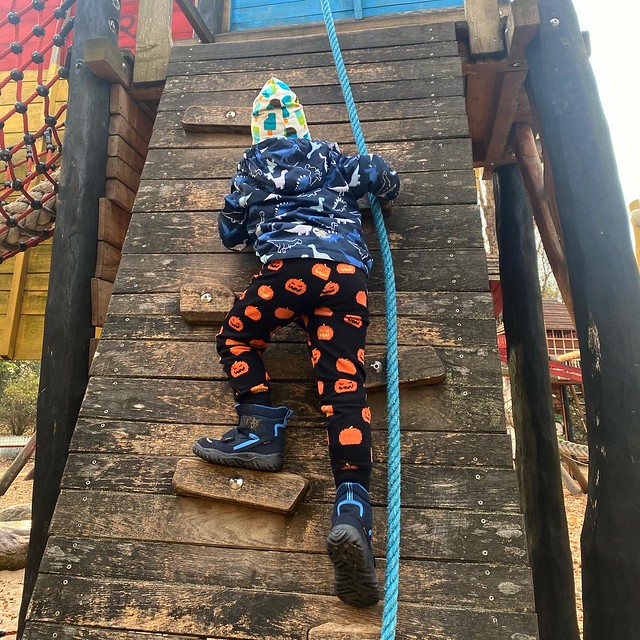 I’m writing this on a Friday evening now, which means we survived M’s first week back at work. He has his own workspace now, which consists of a tiny desk in a small corner of our bedroom with just enough room for a monitor, keyboard, mouse, and laptop if everything is placed just so — and I have my office back. It’s not the best or roomiest setup on his end, but it sure beats the kitchen table, or the back and forth switching from last spring. 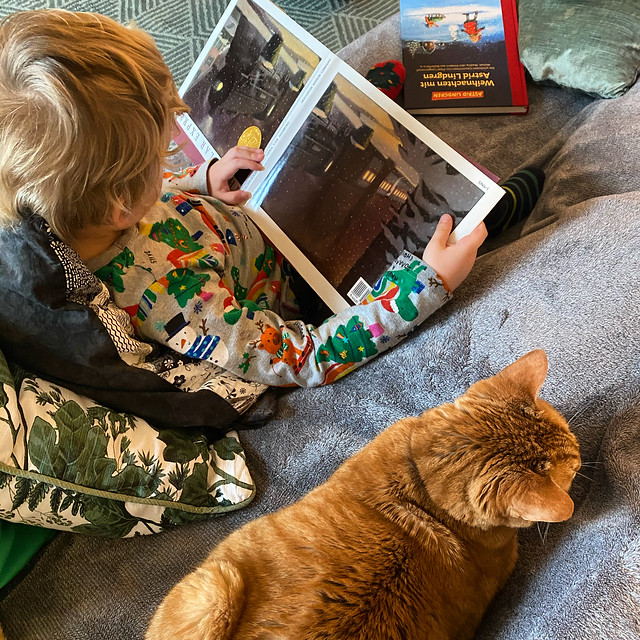 How else are things different? Well, no more finding gaps in his schedule that work for me. Here’s how our days roughly seem to be going (subject to change and tweaking, of course):

720: Make coffee, head to my office, get started on work.

915: M. goes into the bedroom to work. I come out, usually while the kid is in the middle of his breakfast, and I make my own and try to eat it while also trying to convince said kid to clean up, brush his teeth, and get dressed.

1000: I get ready and then we sit down to do our reading. I started working through “Teach Your Child to Read in 100 Easy Lessons” with our son on January 1 because why not, and also because he expressed an interest in learning to read. We do a lesson a day, though occasionally we need to call it quits and stop early, picking up where we left off the following day (for reference, it’s the 15th and we’ve completed 12 lessons). If anyone is wondering, kiddo can already read about a dozen words, so even though it’s challenging for us both, it’s working.

1100: Reading is done, we’re cleaned up and ready to go, so we head outside (on a walk, to a playground, on a bike ride, on an errand — literally anything to get him outside and moving his body and breathing fresh air). Note: On days when we don’t manage to make it outdoors, woah does it make a difference (in a bad way).

1300: I clean up and it’s the kid’s time for independent play. He’ll go in his room and get involved with Legos or books or will bring some toys out to the couch.

1400: We have mixed feelings about tablets in our house. On the one hand, they’re great for giving us parents a break. Plus there are tons of educational and interesting apps out there. On the other hand, too much tablet (and especially if it goes too late) makes for a cranky kid. So he gets two hours of screen time a day, now always 1400 to 1600. The only thing he ever wants to watch is Sendung mit der Maus, so we have no qualms about it because he is learning a ton! Meanwhile, I take these two hours to work.

1600: Tablet is off, I come out of my office, and M. (most days) wraps up work. We have some kind of transitional activity like reading a book, or doing a puzzle, or doing a craft, or playing UNO as a family.

1830: We start the getting-ready-for-bed process, which sometimes takes 10 minutes and sometimes takes an hour. Any extra time is spent doing calm things like picking up toys or putting away books or playing quietly.

1930: Bedtime, which consists of a story and a meditation. We alternate who does bedtime every other night. (For a long time, I mostly did it. But it meant I didn’t have “free” evenings, and when M. did it, had more struggles because B. would respond to his expectations being changed with not calming down or sleeping etc. But sometime over the past year or so we just switched to every other night and it has definitely made a noticeable difference.)

2100: Depending on if it’s my night to do bedtime or not, I’ll do a ride on the indoor bike either after B. is asleep or when he goes to bed. I usually spend this time reading.

2200: Showered, in bed, and reading until I’m tired, at which point I do a meditation and sleep.

If you read this schedule you may be thinking “Three-ish hours of work a day? How do you get work done?” Well, the answer is: weekends.

Yeah, I know. But for now, it makes more sense for our collective stress and for B.’s need for consistency to have me fit work in during the early mornings and in the afternoon, and all day (or as much as necessary, which is sometimes only half a day) on weekends. And after a week of this, I’m still completely exhausted, but it also somehow feels much more doable, so it’s what we’ll do for now…