Almond Joy Energy Balls from Making Thyme for Health
The combination of nut butter, chocolate, and coconut is one of my favorites, which is why I had high hopes for this recipe. Unfortunately, it didn’t deliver as I would have hoped. It was still tasty, but not knock-your-socks-off delicious. I still like the potential though, so I might just make some substitutions next time around. 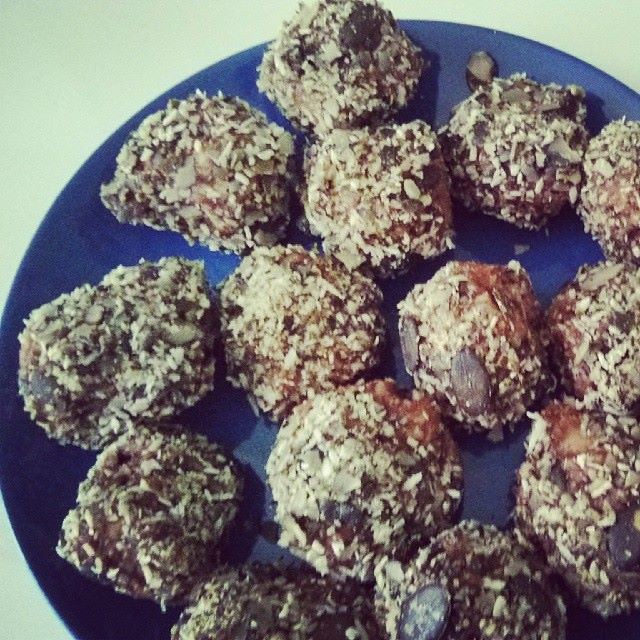 Chocolate, Banana, Peanut Butter Energy Bites from Craving Something Healthy
Of all the recipes, this is the one I changed the most. First, it calls for chocolate protein powder, which I don’t use because most versions aren’t vegan, and I would rather get my protein from food sources. So I mixed 1/4 cup of ground flax seeds with 1/4 cup water to make a binding agent. Next, it calls for one cup of peanut butter, but I found that 1/2 cup was plenty enough. This recipe also asked for raisins, but since I am not super fond of them, and since I used a binder that didn’t have chocolate, I decided to put smashed pieces of dark chocolate in instead. The result was still great though!

Raw Vegan Peanut Butter Pumpkin Bites from Because I Like Chocolate
I struggled with making these because they just didn’t stick together as I would have liked. The recipe does caution that you might need to use extra peanut butter, which I did do, although I did go over the amount of one cup. However, the taste was fine and they make great little snacks in the morning with coffee or just when I want to eat something quick and easy. They did crumble a bit though so I had to always make sure a napkin or plate was underneath one when I went to take a bite.

Vegan Chocolate Haystacks from Because I Like Chocolate
Making these was easy-peasy. Not only were they not a hassle, but they also were from ingredients that I already had around the house, and they came together quickly. M. noted that they taste somewhat like Chokladbollar, and I agree, but they don’t have coffee or as much sugar.